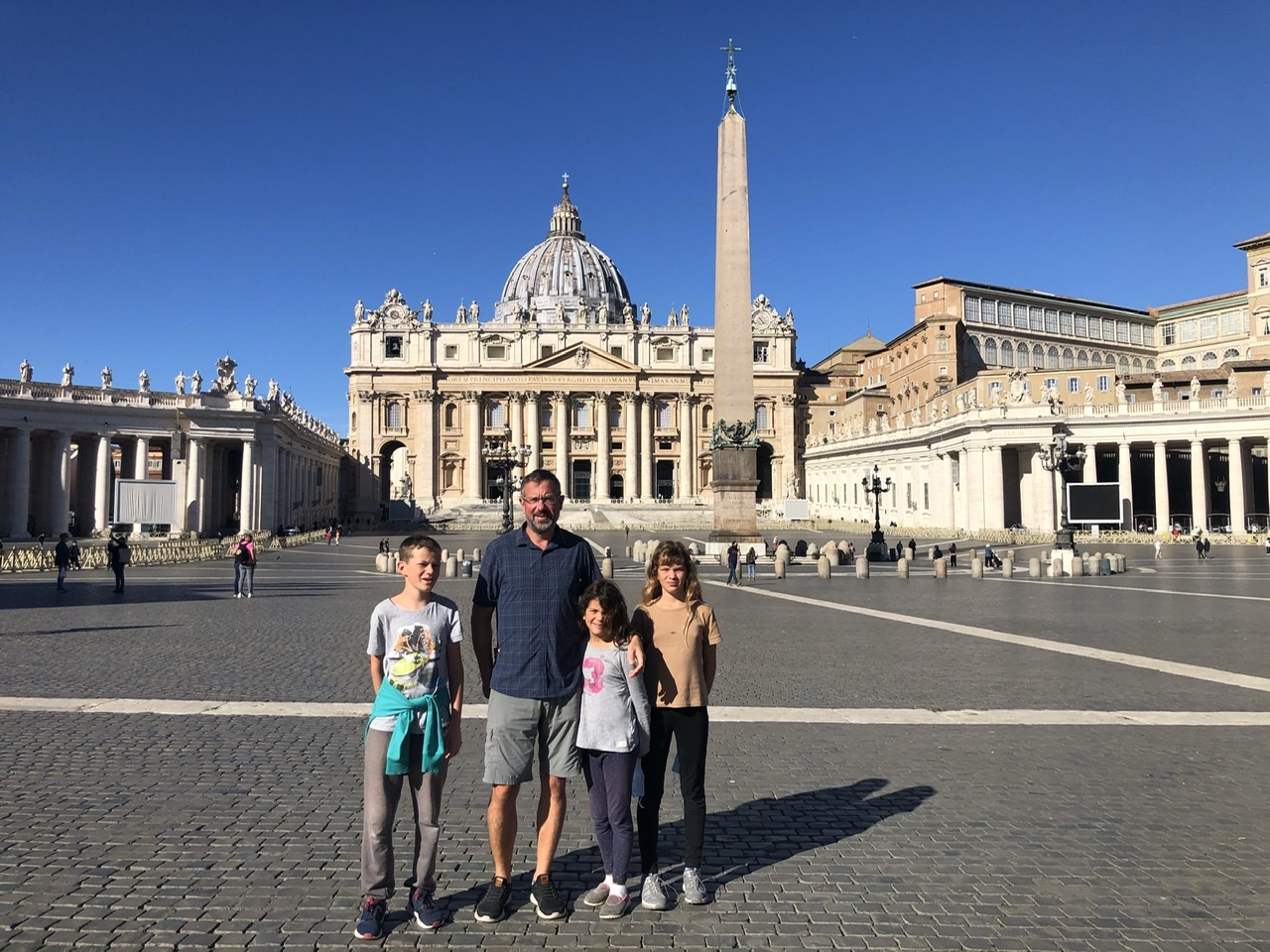 I probably should start with our short stay in Ancona, about halfway between Venice and Rome. And that’s the only reason we stayed there, I didn’t want to drive a whole day down to Rome, so we stopped for a couple of nights and explored the Adria Sea town. Nothing much to say about it, we had a fantastic roof terrace where we had a few meals and we finally went swimming again at a nice beach a few kilometres out of town. A bit of a steep walk down and up again to get to it but it was worth it. As for all the other parts of Italy we visited so far, we had this part of the country pretty much to ourselves. Positive as there are no crowded places or beaches and not so positive as there is just nothing happening. We saw rows and rows of beach chairs and umbrellas with just no one being there. Weird times.

Anyway, the Adria Coast is probably not something I enjoy that much anymore but I have good memories as a young fella driving there and having a pretty fun holiday with some mates. But that’s a few years ago now, just a few…
So let’s get to the next big highlight of our trip – Rome! We found a nice AirBnB again, close to all the main attractions in the middle of town and with its own car park to leave the car there and explore the city on foot. One negative of living in town is the constant wailing of sirens. The Italian ones will never win anything for their rather annoying “melody”.

Italians are known to be let’s say erratic drivers at best and driving through Rome they made themselves proud I would say. But after having driven around some crazy South Americans for some time, it actually felt kind of timid in comparison. They like driving fast, that’s for sure. At least 20-30 Ks over the speed limit, then abruptly slowing down for one of the many stationary speed cameras (which are fortunately announced via multiple signs at least a few hundred metres beforehand) to then speed up again like Schumacher. Needless to say that I felt just at home driving around in Italy.

Back to Rome though. Once we had stuffed our luggage in the apartment, we headed up the road and after 5 minutes stood in the middle of St Peter’s square in front of the massive St Peter’s Basilica. Having seen the place and the famous balcony overlooking the square multiple times on TV when the pope appeared or even a new pope was announced, I have to say that it is an impressive sight indeed. Couldn’t find the chimney with the white or black smoke though, I think it is further down in the Vatican. We walked around a bit and noticed the long fences usually used to manage the crowds – only that there were no crowds at all again. It looked like the queues to get into the basilica usually are hundreds of metres long, only for us to just walk in without any wait. Pretty cool, and even better – no entry fee of any kind, just a quick bag scan and in we went.

I have seen a few churches, cathedrals, domes, and basilicas in my life but boy, this is something else. Absolutely massive! Inside are many smaller chapels, beautiful painted ceilings and also the quite famous Pieta by Michelangelo. We wandered around for quite some time and even visited the attached museum. The kids wondered a lot about all the sorrow and despair shown in many of the paintings. Quite interesting to talk about religion with them, not my strong suit that’s for sure.

One other thing you might notice on the pictures is that when we arrived in Rome a general mask wearing, even outside, was made mandatory by the Italian government. The Corona numbers in Italy and across Europe are soaring at the moment and it certainly feels as if the second wave is in full swing. So when you see us without any masks on pictures, we quickly took them off for a picture and then put them back on. Sounds worse than it is probably and we quickly adjusted to it.

Our first day was a great start to exploring Rome I have to say, very cool. We treated ourselves to a meal out and discovered that the #1 restaurant in Rome (according to Tripadvisor that is) was just up the road from our apartment. They make great sandwiches, have a decent IPA, and we all liked it that much that we went there the next day again. Talking to the guys running the restaurant I got a bit of a sense of the impact of Corona on their business as well. Usually they would take bookings days in advance and would be busy as, we just walked in again and had the place pretty much for ourselves. Makes you think…

The next day was a big day! Especially for our little Jella as it was her birthday. She was very excited about it and talked about it for months, no kiddin. The plans for the birthday changed a few times. It looked as if we would be in Germany to celebrate with Oma and family but ended up being in Rome on our own. But by now she had a second celebration with her aunties and will have a third one with Oma in a couple of weeks. That was the last birthday celebration on our trip, sure sign that it is coming to an end. Started with Josina in Cartagena, myself in the Atacama Desert, Jannik in Namibia, Jenni in Langholz and now Jella in Rome. Not a bad run of memorable birthdays.

It was a big day for sure, we walked a lot and tackled some of the biggest attractions in Rome. First the Pantheon, Rome’s best preserved ancient Roman building dating back two thousand years. That got the kids thinking and they especially liked the round, large opening in the roof/dome. Needless to say that we just walked in again.
Next up, and just down the road, the Trevi Fountain. For me, this was my personal highlight of Rome, never seen anything like it! A huge fountain made of white marble, we had the right light/sun and it looked fantastic. And of course we threw in a few coins for good luck.

After a quick refresh we wanted to head to the Colosseum but it is crazy in Rome, you just turn a corner and there is the next beautiful square, ancient building or church. So we wandered across Piazza Navona with another great fountain and then stopped at Piazza Venezia took an elevator to the top of the massive monument to get a good look all across the historic part of town. To one side we saw the Vatican and towards the other the Colosseum and Forum Romanum – spectacular. Probably used a few too many “great”, “spectacular”, “beautiful” etc. in this article – but it just was “awesome”.

After a brief detour to get our first look at the Forum Romanum, we decided to head straight to the Colosseum as we otherwise would probably have never made it so far. It was our final destination for the day and when we got there – shock! A queue! Hadn’t seen this in ages and it took us 30 minutes to get in – outrageous! The poor guys to usually lure tourists to pay big dollars to skip the line still and get in with a pre-booked guide tried to convince us and everybody else, but their business model went up in smokes with the lack of tourists / queues I reckon.

The long wait hanging out in the sun was well worth it though, the Colosseum is another very impressive structure and the kids loved it. Imagining and reading all the stories about the wild animals, gladiators and the spectacle in the arena was pretty cool and the exhibition was well done. 65,000 people fit into the Colosseum in its days, not bad even by todays standard. Last sightseeing stop of the day were the ancient ruins of the Forum Romanum and Palatino straight next to the Colosseum. The legs were getting tired by now, and it was time to head to our favourite restaurant for Jella’s birthday dinner.

A quick ice cream and crepes to get some energy back and we walked all the way back towards our part of town. The dinner was nice again and Jella even got a chocolate muffin with a candle for her birthday. We were all pretty buggered after this big day and had fortunately only one more highlight planned for our next day, the Vatican museum and the Sistine Chapel.

The entry into the Vatican museum was again very easy the next day (though the guys still tried to convince us to jump the queues… without queues being there). Once inside 5 minutes later, the word coming to mind seeing the Vatican is pompous. So many treasures accumulated over centuries is just crazy in my opinion. There is no speck of ceiling or wall without any picture, painting or statue. The smallest state in the world but certainly not the poorest.

Main goal of the visit was to see the Sistine Chapel. We entered a long hallway with its illuminated, spectacular ceiling and to be honest, I actually thought that this must be the famous Chapel at first. Turned out that this was just another hallway after all and after passing one chapel after the other and more art by famous painters even I know, we finally arrived in the Sistine Chapel. It is huge and the Michelangelo ceiling looks spectacular indeed. Seeing on pictures that this is the place the cardinals meet to elect the new pope is pretty cool. You are not allowed to take any pictures but I snuck in a couple before heading back into the Vatican gardens. We saw a lot of art by Michelangelo over our few days in Rome. This guy must have been very, very busy to get all these masterpieces sorted in his lifetime.

And that was our visit to Rome. The rest of the day we relaxed, had a couple of drinks and enjoyed the atmosphere. A lot to take in in a few days in Rome but certainly a highlight of our trip. At the same time Rome marks the most Southern point of our trip through Italy. We will now head up to Tuscany to catch up with my sisters for a week or so before slowly but surely heading back to Germany. 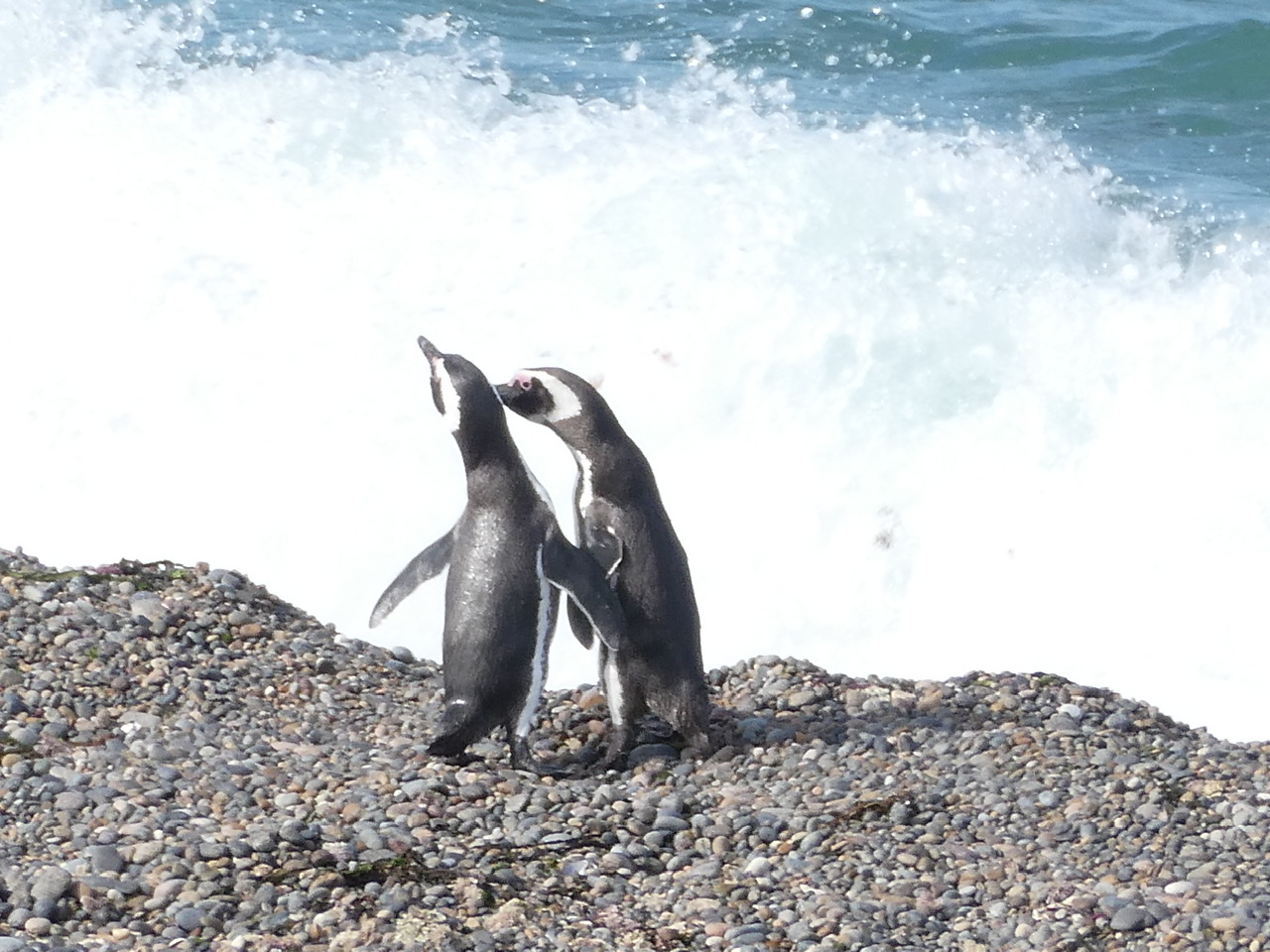 Finally we are in Patagonia, one of the areas we were very much looking forward to be in. And we are also finally over our Jetlag! But to be honest, 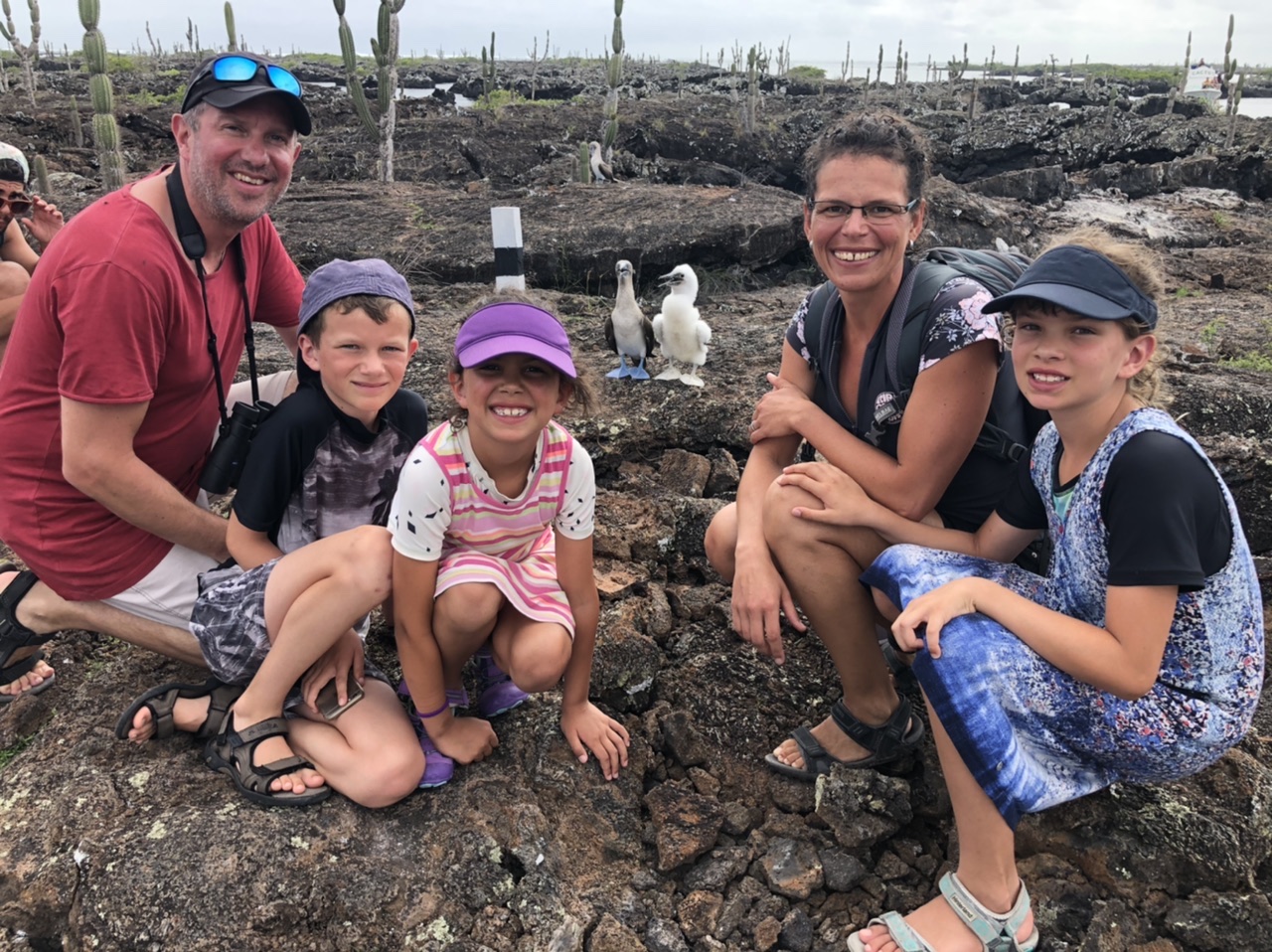 Quick warning, this will be a bit longer blog post. Internet connectivity on the Galápagos Islands was pretty poor which makes writing harder and I have to cover a couple 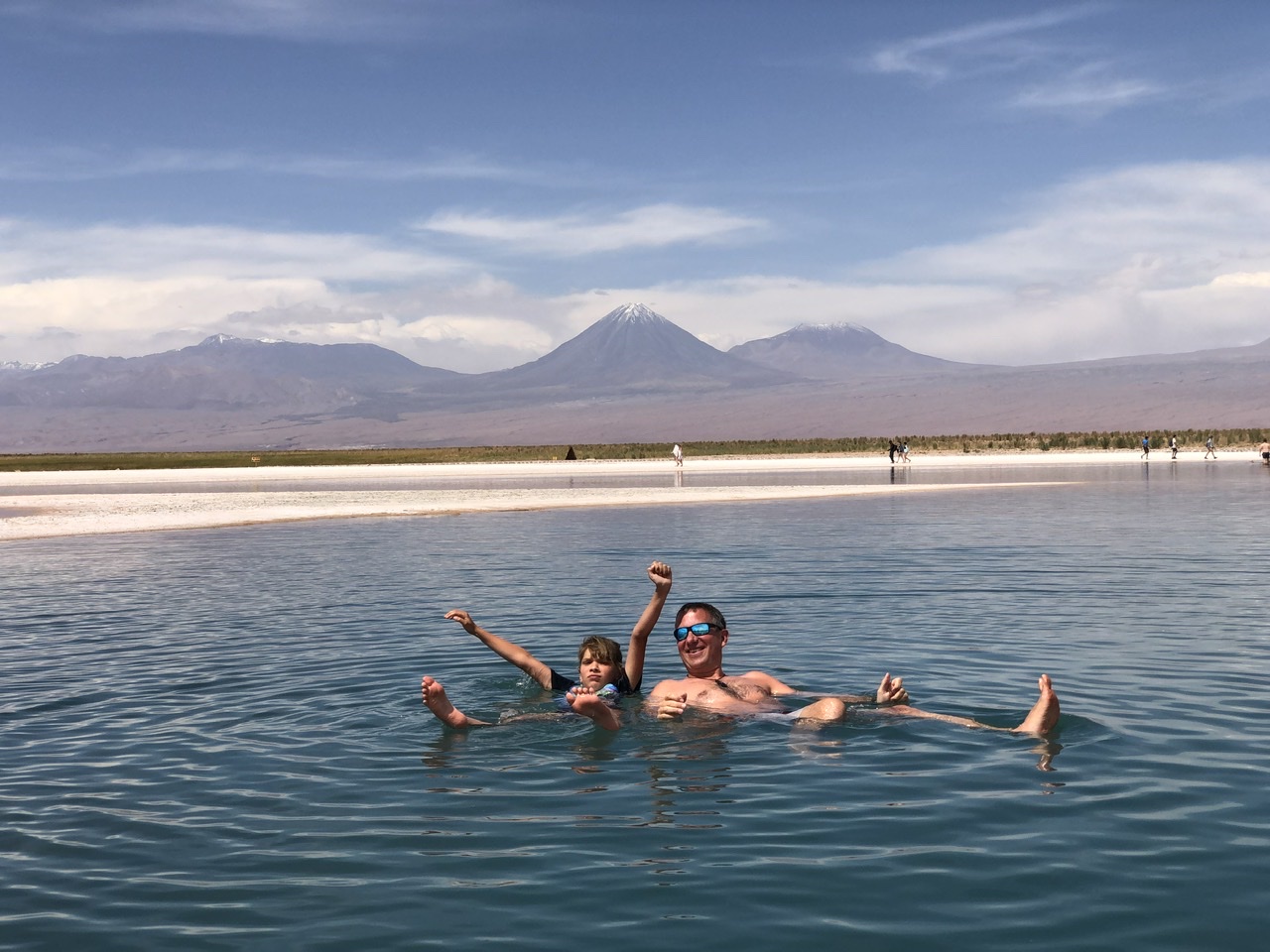 I am writing this blog post from Buenos Aires, clearly indicating that our time in South America is coming to an end. This is where our adventure started about 2.5